I spoke to a friend of mine tonight at work that had a similarly nightmarish experience with the shame shack. Now, when I first wrote this article I made the decision to censor the name because I actually got very good service. The atmosphere was just utter horse shit.

Let’s call my pal B.

B mentioned she’d read my blog and had to tell me that her experience there was similar  if not worse than my own. She was lead down the same long stone pathway of humiliation into the same dingy, heat-less outhouse of plus size dresses that time had forgotten. Only her consultant was extremely rude. She mentioned at one point to this woman that she was looking for a certain style of gown, and was promptly told that she was “too big” for this gown style. So not only do they escort you into a den of 20 year old crinoline, they tell you you’re too big to wear certain styles, apparently.

I am genuinely sorry this happened to B, one of the kindest people I know. I have her to thank for my new amazing job. The fun part of this story? B was then interning for the second largest wedding consultant/planning etc, group in the area who promptly informed Bridaltown that they were no longer going to receive any more of their business. I’m happy her employer stood up for her.

I’m sorry this happened to B, and I’m sorry these things happen to anyone.

We’ve either done it, or seen it done.

You’re in the lunch room at work and you grab a donut. You search for someone…anyone in the room and say “Well, there goes my diet.”

At a wedding: “This is going straight to my thighs.”

I’m not going to slam the population that exhibits this behavior. Connecting food with guilt is something that I’ve done for a very long time, and I understand it’s a way to verbally atone for what you think is a detriment to your health, coupled with showing everyone that you are not a gross pig. However, the connection we have with food and guilt is what got a lot of us…me very much included…in the situations we are in now.

We’ve all seen images like this. Women secretly scarfing a brownie sundae in their living room in the dark, candles lit, seductively licking the spoon. Talking all sexy like on the phone to her bestie about the Boston cream pie she had three times this week (except it was actually yogurt…NAUGHTY SNEAKYPANTS) and this particular woman who looks like she’s celebrating the house she just set on fire.

For a long time, I didn’t let anyone watch me eat. Being overweight made me feel like everything I put in my mouth was judged by those around me. The guilt got deeper. I’d eat out with friends, and finish the rest at home in the dark watching Police Academy. I’d never order dessert, but I’d stop for ice cream on the way home.

So I decided to attempt to disconnect food with guilt. When I eat, I eat with Devo, or with friends. The times I eat alone are because I am alone, and not because I’m going out of my way to be alone. The only thing remaining was my extraordinary drive to apologize for what I did eat.

In the past two years I’ve made a very concentrated effort to remove food apology from my life. This does not mean eating what I want, when I want. My health is in jeopardy if I do that, which the doctors have made very clear. However, if I’m at buffet one weekend I’m not going to clue in the rest of the world unless it was extremely delicious!

It’s not easy, especially being overweight. People watch what fat people eat. They watch us work out, walk down the street etc. It happens. It’s ok. Feast your eyes. Right around the time I decided to end food apology I started going to the gym. I wanted to tell the world, because the first few times I felt amazing about myself and my accomplishments. I decided that this was a different sort of over-sharing, because I got support. I needed it, so I put it out there. There is no support when you eat half a donut and get the other half fifteen minutes later. There is only a weird silence, followed by the occasional “Oh please you look great” which you never believe, because you’re a gross pig who just ate a whole donut.

Food’s connection to guilt, to me, is proof positive that I am battling an addiction. It’s also proof positive that we are a nation still obsessed with appearance. If a beautiful, thin girl can’t pick up a cookie without bowing penitent at the alter of the break room table, what the hell are we doing to ourselves?

Believe it or not, this new-found freedom from food apology has helped me exceedingly in both my self esteem and my quest to be a healthier person. Food is becoming less and less of a pair of comforting arms the more I disconnect it from my emotional well-being. Eating a piece of Easter candy with no follow-up comment has started to take away the naughtiness of it all. It’s not a life ruiner, it’s a piece of chocolate.

This does not mean I’m throwing caution to the wind and eating everything that’s not nailed down. I just don’t want to feel bad about it anymore. Feeling bad about things and then eating to feel better is a lifelong cycle I’m trying to break, and loving my treats is helping. Taking away negative feelings from food is the best thing I’ve ever tried to do, and it’s working. 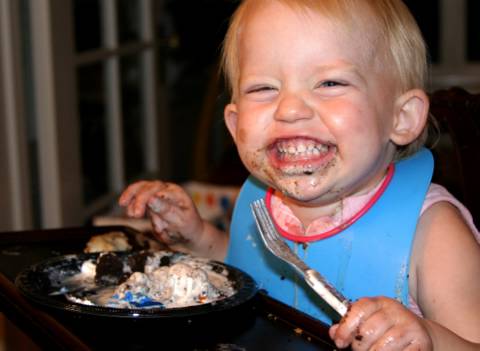 So go to the gym if you’re going. Do that extra lap. Just try to fight the urge to proclaim your horrible guilt, and move on knowing that you’re working towards emotions being emotions, your body being healthy, and food being delicious.

Look to the world for support, not confirmations of guilt. You’ll be happier receiving the former.